It’s one of Beijing’s most anticipated diplomatic events of the year but the heads of most major Western countries won’t be there – and neither will North Korean leader Kim Jong-un.

As Beijing on Tuesday announced a guest list of more than 40 foreign representatives who would attend a military parade to mark the 70th anniversary of the end of the second world war on September 3, observers said China’s “true friends” had made themselves known.

Prime Minister Shinzo Abe of Japan will not be attend

The United States, Canada and Germany will send representatives from their diplomatic missions in China, while France and Italy will send foreign ministers. 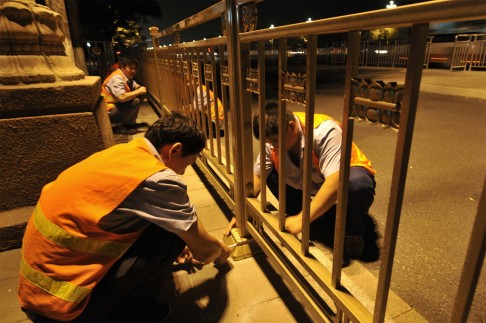 the venue for the parade. Photo: Xinhua

International relations expert Jin Canrong, of Renmin University, said the list reflected strategic suspicions between Beijing and the West. “One of the diplomatic aims behind the military parade is to make clear who will be China’s true friends,” Jin said. “Obviously, Russia and South Korea have expressed [their intent] with deeds.”

Cui Zhiying, a professor of Korean affairs at Tongji University in Shanghai, said Beijing had not expected Kim to attend, because he had also missed Moscow’s Victory Day parade in May.

“Park finally decided to attend the military parade in Beijing because of the reality of interdependent economic relations between China and South Korea,” Cui said. “It’s a fact that Seoul is an ally of Washington, but this is limited to military security.”

The event, seen as a show of might by Beijing as it takes a more assertive approach to diplomacy, will involve 12,000 soldiers and 500 pieces of hardware passing through Tiananmen Square.

Analysts have claimed some leaders feared the events would have an overtly nationalistic or anti-Japanese tone, but Beijing has denied this.

Beijing-based political analyst Zhang Lifan  said the parade was aimed at shifting public attention from domestic dissatisfaction to international  issues, and would reinfo

rce negative public sentiment against the US and Japan. “The parade will help increase nationalist sentiment, by showing the public that China has become a real power under the leadership of the Communist Party,” he said.

Pakistan will parade with Chinese Military as a “true Friend”